A scholarship winner turned music professional, Marie constantly finds ways to give back. 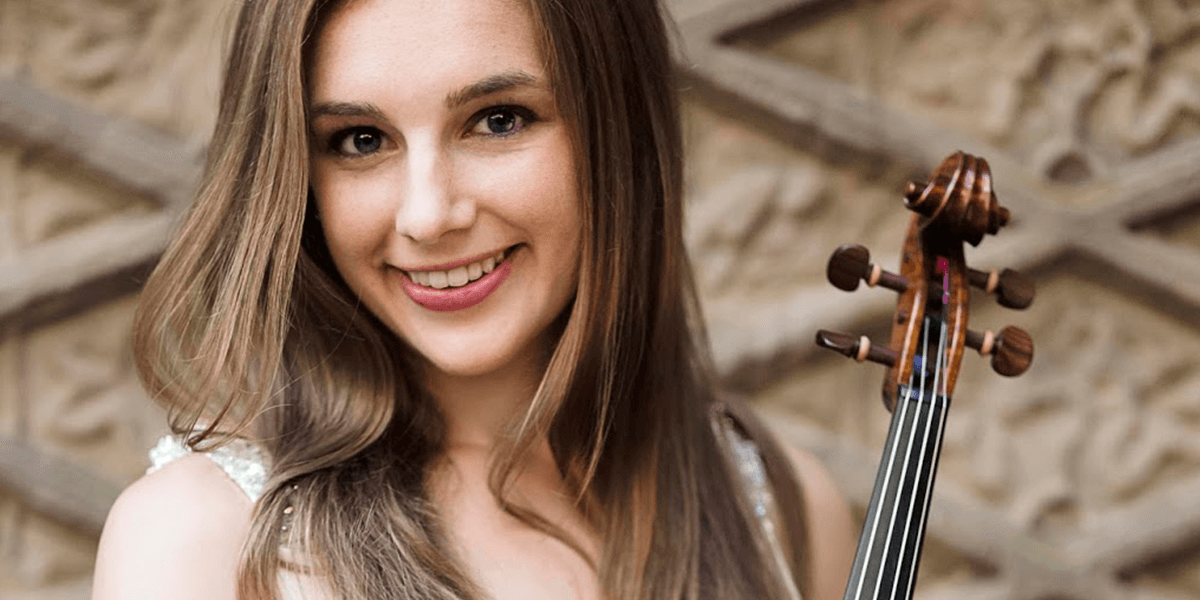 Scholarship Received: 2009
High School: TW College Park – May 2009
University: Juilliard School – Undergrad, 2013 // Grad, 2015
Advice for future music professionals: “If you want to succeed in music, you have to really want it. It’s not going to be easy.”

Marie Daniels, 24, is well acquainted with The Cynthia Woods Mitchell Pavilion. Having lived in The Woodlands all her life, she frequented the venue for concerts. But, unlike many other residents, Marie has come to know much more about The Pavilion than just its performance events. That relationship began with her acceptance of an instrumental music scholarship from The Cynthia Woods Mitchell Pavilion Partners Fine Arts Scholarship Program.

In fifth grade, when Marie was required to choose which fine arts elective to pursue at school, she was torn between art and orchestra. Eventually deciding to give orchestra a try, Marie happened upon the viola. “I ended up really liking it,” Marie explained. “And when you’re that age, you just keep doing things that you like.”

Years later, after pursuing her initial interest in instrumental performance and expanding upon her talents, Marie started applying for music colleges and conservatories as she intended to further her fine arts education. The Juilliard School in New York City was the goal, but tuition and living expenses were a small hindrance to that dream. Fortunately, Marie heard about The Partners’ scholarships and focused on her audition.

Having already completed several college auditions, Marie was confident in performing the same pieces on The Pavilion stage. In addition to gaining funds to put toward her expensive education, Marie was grateful for the support that the scholarship symbolized. “You get more than just dollars,” she said. “It’s nice to have that tangible support from my community, and it’s ultimately a good connection to have with The Pavilion.”

The connections she forged with the people behind Partners proved to be even more valuable than the scholarship itself. A few years into her undergraduate program, Marie conceived an idea for The Woodlands that hadn’t been offered previously. Her goal was to offer local students a chance to study and play chamber music, as she would’ve liked to do when she was their age. “Chamber music was important to me during my early studies,” Marie said, “and I knew other young musicians would appreciate the opportunity. It was necessary to bring the program to this community because there wasn’t anything quite like it.”

The first year of her program—ChamberFest—hosted only four students in Marie’s living room. The next year, CEO Jerry MacDonald welcomed Marie’s unique idea to take place at The Pavilion. “I emailed my steady contact from scholarship program and explained my purpose for ChamberFest,” Marie clarified. “She passed it on to Jerry, and soon we developed a really good partnership. It became an official educational event!” ChamberFest has since continued to grow, earning a place on The Pavilion’s annual calendar.

Living in New York allows Marie to keep herself busy in the world of fine arts. “One of the best things about being a musician is that there’s so much variety in what you can do with your music,” Marie said, “and I want to do them all.” She’s currently employed through a mixture of free lancing, concerts, teaching, and part-time administrative work. In each of these positions, Marie uses music to reach as many people as possible, “because it’s our way, as musicians, of adding some beauty to the world and experience life on another level.”

“For me, it’s as simple as my belief that art is a necessary subject to study for humanity,” Marie said, to summarize the root of her passion. “Humans have been studying music since the beginning of time, and there have been countless studies about its positive effects on humanity.” Through The Cynthia Woods Mitchell Pavilion Partners Fine Arts Scholarship Program and ChamberFest, Marie hopes more students will take advantage of these resources and pursue an education in fine arts.

For samples of Marie’s creative works and more information about ChamberFest, visit mariedaniels.com/ and thewoodlandschamberfest.com